March 2013. Every race brings its own surprises. Yesterday the luck of the Irish smiled on me. While my time in Tacoma's Saint Paddy's Day Run was not a PR, the race exceeded my expectations. This turned out to be a thoroughly enjoyable half marathon. 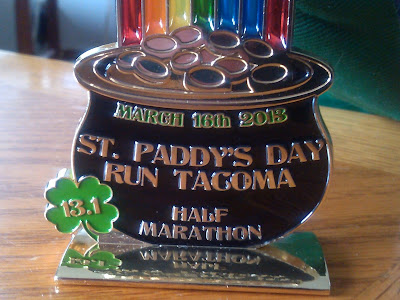 Training. While I was proud of finishing my first marathon in November, I had a lot of problems with the race. One problem: I really felt like I had lost speed by focusing so much on distance and endurance. To significantly improve my marathon performance, I'm going to have to be able to run faster miles sustainably. So the training focus over the last three months has been to rebuild some speed while maintaining higher base mileage.

With that focus in mind, I've really been aiming towards better preparation for a second marathon in late spring or early summer. The Saint Paddy's Day Run was really meant to be just a strenuous long run as part of that overall training plan. My pace runs each week have worked towards an 8:30 / mile pace sustainable over 10K, and my long runs have varied between 10 and 15 miles. By contrast, a year ago I was doing a slightly faster pace run, but only doing long runs of 8 miles. My focus on sustainable speed was rewarded at last week's Foothills Dash with a 10K PR of 51 mins 57 sec. Yesterday's half marathon was almost an afterthought by comparison.

The Course.Commencement Bay is a several miles long inlet that connects the Puyallup River to Puget Sound. The south shore of the inlet is a high bluff running from the mouth of the river out to Point Defiance. The city of Tacoma is built on this bluff, overlooking Commencement Bay. As it happens, going from downtown Tacoma out to the Point Defiance area and back gives you just enough room to run a half marathon, but no more than that.

So: long downhill at the start from the downtown area down to the waterfront, then a long, flat stretch along the waterfront out to the Point Defiance area, followed by a zig-zagging climb that lasts about a mile. Then reverse this to return to the downtown finish line in front of Paddy Coyne's where the after party will be in full swing. Note that this means the last half mile is all uphill.

Its a beautiful course. The city of Tacoma has made a real effort to preserve the waterfront with green space along Ruston Way, and the view from Ruston Way out over the water is serene. I truly prefer Tacoma's waterfront over the carnival atmosphere tourist traps of either the Seattle waterfront or San Francisco's Fisherman's Wharf. Ruston Way is predominantly park land and a trail. The horizon is dominated by the green of Vashon Island, and you can see the ferry quietly plying the waters between Vashon Island and Point Defiance.

One thing my last two races taught me was the value of running on a well known course. While I haven't run this course before, my wife and I spend a lot of relaxation time along the Tacoma Waterfront, and our family frequently makes a day outing over to the Point Defiance Zoo. And last week's Foothills Dash was on the trail on which I do my long runs. By contrast, my previous several races have been on routes I was not very familiar with. That lack of familiarity means that a well intentioned race plan often founders in the face of the conditions you confront in the moment.

The Plan. I enjoyed approaching this race with no goal in mind other than having a good run. But for me, a sub-2 hour half marathon is respectable (my PR is 1:56:20). So I wanted to have the 2 hour time in mind. I'm 6'4", so my long legs mean I can really stretch out on the downhills and pick up speed, but I also really suffer on the uphill sections.

The plan, then, is to go out reasonably fast on the initial downhill, stay comfortable through the flat miles along the waterfront, and hopefully hit the base of the turnaround hill at or close to a 2 hour pace. Then back off and take it easy through the long uphill, pick up the pace on the downhill after the turnaround, and hopefully have enough stamina left to keep a strong pace on the return leg along the waterfront. Any "kick" is going to have to come from miles 8.5 to 12.5, which are very flat, and then slog through the last half mile uphill to the finish.

The race. For a week leading up to race day we have had rain, often accompanied by wind and cold temperatures. The last couple of days have warmed, however, and when I get up at 5:45 it is already almost 50 degrees, and while gray, there is no rain. Our neighbor has agreed to watch our seven year old, so my wife is going with me. Just knowing she'll be at the finish line is a big boost for me; she is my inspiration in everything I do. Paddy Coyne's Irish Pub, with the Start / Finish Line just outside, is open at 7:00 for breakfast, and when we arrive at 7:30 the place is already hopping. There's a band set up right outside, and they are staying warm by rockin' out.

Start time is 8:10 for the several hundred participants in the half marathon. Because we are the longest race of the day, I am greated with a pleasant surprise. We'll actually have pace runners. The ones that matter to me are 2:10, 2:00, and 1:50. I line up at next to the 2:10 pace runner, hoping to keep the 2:00 pace runner in sight.

We start, and in my mind I keep repeating my simple running mantra: "run comfortably, but put some bounce in your step." As the herd shakes out from the start and moves onto the big downhill, I quickly leave the 2:10 pace runner behind and move up to the 2:00 pace runner. Near the bottom of the hill I've passed her as well and pulled within sight of the 1:50 pace runner. I know I should be banking time on the downhill that I'll be giving up later, but I'm worried that I've started a little too fast. As we hit the flats I ease off my pace and drop back just behind the 2:00 pace runner. Around Mile 2 we reach the first water station and the 2:00 pace runner pulls up. I keep going.

Another mile or so goes by and it dawns on me that I'm having a pretty good race. I'm now well ahead of the 2:00 hour pace, but feeling very comfortable. My breathing is easy, I'm breathing in sync with my stride, and my legs feel good. For the first time since I signed up for this race it dawns on me that I might have a shot at a PR.

At this point I'm experiencing something I've seen in every 10K to half marathon race I've run: the "pack." By this I mean there always seem to be a few fast runners way out in front, then a clump of runners from about the 7:30 / mile pace back to the 9:00 / mile pace, forming a pack, and then a big gap only sparsely populated with runners until you find the 10:00 / mile runners. I know this because I'm often running in this sparse gap, or, as I am today, at the tail end of the pack. I don't know if others have experienced this phenomenon, but in my mind it separates the runners (9:00 / mile or faster) from the joggers (10:00 / mile or slower). For the record, I am a marathon jogger and proud to be one. Anyone who is dedicated, regardless of speed or distance, is a runner and I applaud all.

We hit the climb leading up the Point Defiance hill. It starts to rain. As we gain elevation, we lose the wind shielding of the hill. So I am now running uphill, into the wind, in the rain. Because its a zig zag route through residential streets, you can't see the top. I'm having that all too familiar psychological battle that runners have with hills: as I turn each corner I hope I've reached the top, only to find yet another upgrade. The 2:00 pace runner passes me and still the climb goes on. And on. And on. Finally we reach a corner with a smiling National Guardsman waving us on, and he says, "It's all downhill from here, folks." We're now looking back with the whole of Commencement Bay stretched out before us. The rain has stopped, and the sun is trying to peek through. I can't help but smile. It's an energizing moment, and I know the hardest part is behind me.

We start the downhill, and I am flying. I don't know what my time was for that mile, but I'd guess it was about 7:30. I am in the hunt for that 2:00 pace runner. We reach the flats, and still no sign of the pace runner. I ease off my pace a good bit, but I'm still pressing. Any kick I'm going to do has to start now. Somewhere between Mile 9 and Mile 10 I reel in the 2:00 pace runner and keep advancing.

As I surge along the flats passing other runners I have two thoughts. First, I'm probably not going to hit a PR. I'd not only have to get back to PR pace, I'd have to bank some time in preparation for the uphill to the finish where I will lose ground. There simply isn't enough distance left for me to make that much progress. Second, it occurs to me that I'm having a very good race. As a runner I've matured to the point where 13.1 miles does not intimidate me in the slightest in terms of distance. The plan I had laid out for this race was the right one, and I'm running very much to plan.

Half mile to go, and I hit the last uphill. The combination of the hard pace I've kept over the last few miles and the hill takes its toll. My legs now have that heavy, leaden feeling. But I know my wife is waiting at the finish, and of course I want to look strong for her. Still I'm struggling. Then I get within earshot of the band at Paddy Coyne's, and I let the music pull me in the rest of the way to the finish.

1:57:02 is 42 seconds off my PR pace, and I am thrilled with that time. To be at that level of performance this early in the year bodes well for the races I have planned later on: a marathon in early June, and another half marathon around October.

My wife and I finished the morning with lunch at the pub. A frosty, cold New Castle Nut Brown Ale and a plate of bangers and mash really hit the spot after the race, and there's just something very uplifting about a raucous crowd of runners in the Saint Patrick's Day spirit after a really fun run. Leprechaun hats and lime green tutus abound. Even a kilt or two. And fortune really smiled. By the time we finished lunch it was raining. By the time we drove back home it was pouring. Ah, but for a few precious hours that morning the sun shone and fortune smiled.