Saturday in Paris by Mark Stone

October 2009. On the way back from Parc Monceau, I noticed that the Metro train I was on would go right by the Temple of the Sacred Heart (Sacre Coeur). Built atop Montmatre, it is said to offer a nice panorama of the city, as well as one of the few examples in France of Eatern Orthodox-influenced architecture. So on a whim, I exited the Metro and took a hike. 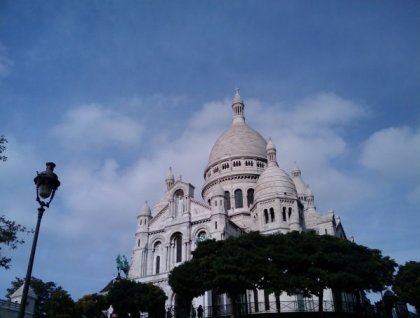 It's a bit of a hike; only 4 blocks or so, but all uphill, and on a Saturday afternoon the streets are jammed with vendors and shoppers. Then there are three fliights of stairs to reach the base of the temple itself.

As I near the top, I can see and hear a street musician singing "Wonderwall" to a crowd gathered on the steps above him.

The walls that line the steps are sprayed with graffiti. The breeze blows little dust devils of trash around. When the wind shifts, the odor of urine intrudes from the paths through the bushes off to the side. And the musician's performance is just the kind of brash sentimentality of which the French are so capable. So it is easy to be cynical.

But the kid is actually a pretty good singer, and he knows how to work the crowd. They are all singing along with him, and there must be over 100 people seated on the steps listening mesmerized. They represent Paris' full multicultural spectrum: colonials from North Africa, Chad, and the Middle East; immigrants from India and Pakistan; North Europeans from England, Germany, and Scandinavia. From all walks of life, and every religious belief, they have all come here seeking something, if only for a moment. Even me. And it is a beautiful day. The spires of the temple soar into blue sky above us, and the full expanse of Paris spreads to the horizon behind us. So it is also possible to be moved.

For better or for worse, this is modern life. I choose to be moved.