April 2012. Back in January the Puget Sound area suffered a major winter storm: several days of wet snow and heavy rain followed by enough temperature drop at night to cover everything in thick ice. Trees and limbs cracked and collapsed under the weight of ice, and 100s of thousand of homes were without power for days. Our house was without power for four days.

We lost a lot of food to spoilage, and had a lot of cleanup to do in the yard. My biggest concern, however, was the Foothills Trail which has been my running sanctuary for 3+ years now:

The Foothills Trail wraps around Bonney Lake and the rest of the Plateau area, connecting the towns of Buckley, Wilkeson, South Prairie, and Orting. While it is far from complete, even those sections completed so far offer a marvelous civic space for biking, walking, running, and roller blading through a beautiful rural setting with stunning views of Mount Rainier: 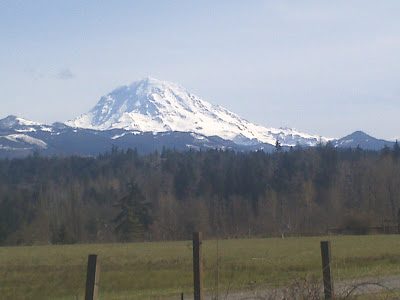 I make as much use of the Foothills Trail as anyone in Pierce County. I am out there every Saturday, rain snow or shine, for my long run of the week. Sundays in good weather I bike along the trail, and often my Tuesday or Thursday run will be along part of the trail as well. So when the trail was devstated by the ice storm, I felt an immediate sense of loss and then a growing sense of personal responsibility. Immediately after the storm the trail was completely impassable for running: 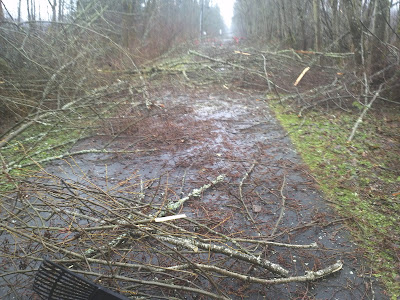 Amidst the vast regional devestation, I had no idea if Pierce County would have the resources to clean up the Foothill Trail. Even if they did, I had no idea when trail clean-up would make it to the top of their priority list. I didn't think there was much I could do personally, but I felt obliged to try. Then I saw a flier in Main Street Coffee House that the County's waste management company would be making dumpsters available in Buckley for anyone who did brush clearing and needed somewhere to put it. That was motivation enough. So on Sunday morning Nathan (who is 6) and I hitched up the trailer to the Jeep, threw in a couple of rakes, a couple of saws, and a hatchet, and set off for the Foothills Trail. Nathan has that wonderful childhood innocence that doesn't separate work from play. As long as he is outdoors, and doing something active with Dad, he's happy: 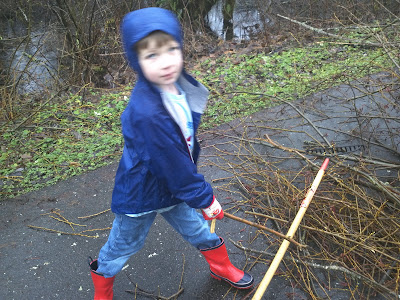 We worked for several hours clearing and hauling trailers full of branches to the county dumpsters. It was cold, raining, and strenuous. Nathan held up remarkably well, and indeed by lunch time we had a lot to show for our work: 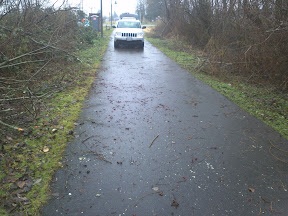 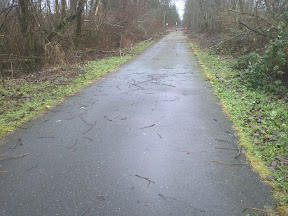 Impressive, but a very small dent in a huge problem. My rough estimate was that if I spent an hour and half every Sunday for six months, the section of the trail that I run on would be clear again. At first that seemed daunting. But, like running itself, chipping away at goals a little bit at a time can yield big results. And having involved Nathan in the project from the beginning, I couldn't really quit unfinished. What would he think? The notion that we sit around helplessly waiting for someone else to fix the problems in our lives.... well, that's just a terrible example to set. We are the stewards of our own community, and we so we have to act accordingly.

So next Sunday we went back out again. And a funny thing happened. The point where we had left off the previous Sunday? Somebody else had stepped in. There was still a lot left to do, but they had made noticable progress. So now instead of 6 months, it looked to me more like 3 months as long as the mystery volunteer kept at it. Nathan and I worked for an hour or so, and paused for the day when we got to some limbs that were really going to require a chain saw (which I do not have) to move. The following Saturday while out running, I checked to see the status of the trail. More had been done, including some chain saw work. I'm sure that must have been the County, or someone they contracted. The work looked very professional.

In the end it did not take 6 months; it took a month. I never saw any of the other volunteers. I'm sure the County did a big chunk of the work, but I'm also sure they didn't do all the work. We, the residents and stewards of Pierce County, pulled together to get the job done. And the best part? Nathan now envisions this not only as possible, but as normal: people will just pull together to collectively solve problems too big for them to solve individually. If only all of life were that simple.