Seattle Versus Portland by Mark Stone 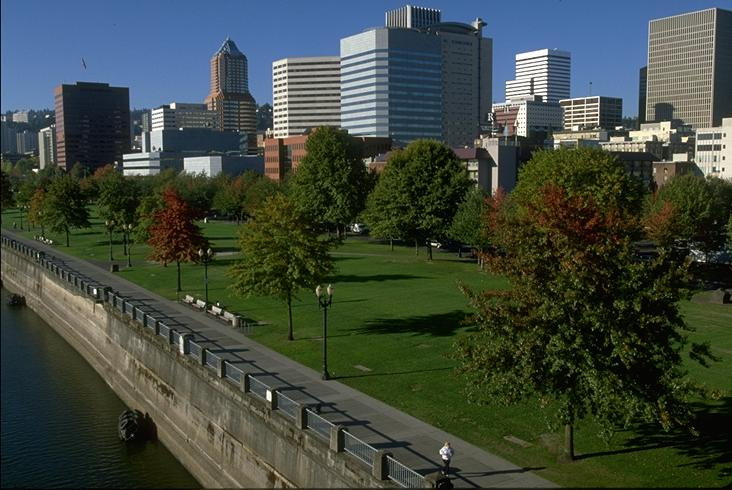 At first glance, these are two very similar cities: both in the Pacific Northwest, both with a distinctive vibe of left coast eco-friendliness and independence, both with glorious summers and damp, dark, miserable winters. Both have a mix of old industries (lumber, aviation) new industries (Amazon and Microsoft in the Seattle area, Intel in the Portland area), and companies in transition (REI and Starbucks in the Seattle area, Nike in the Portland area). Both offer urban sophistication set amidst natural splendor.

My perspective may be skewed by living in Pierce County, but I can't say that the Seattle area has been successful in realizing these goals. Major commute arteries are fewer and more congested in Seattle than in Portland, and while this affects automobile traffic it also affects bus transit. As someone who regularly commuted on public transportation from the Sumner area up to Bellevue, I can tell you the transit times are both daunting (average of 1 hour 45 minutes each way) and constraining (limited windows in which to catch the Sounder train and express buses). Light rail, in particular, is dismal in the Seattle area. It helps only from the airport to downtown, so those in outlying northern or southern areas are out of luck, as is anyone east of Lake Washington.

Portland, on the other hand, has a fantastic light rail system that spans east and west as well as north and south, and crossing major water barriers (Willamette River). As a result, local bus routes coupled to this light rail system are more effective and more appealing. There's a level of unified regional planning to all of this that Seattle just hasn't been able to achieve.

It's the little touches -- the attention to detail -- that make public transit in Portland a delight. I can walk up to a fare card machine and have my card in four taps of a button that takes me about 15 seconds, where each next tap is perfectly obvious. Partly this is good interface design on the machine itself. Mostly, though, it's a matter of Portland's vastly simplified fare system. There are no separate tickets for train and bus. There are no complicated distance-based fare schemes. You are not charged differently for peak hours versus regular hours. There are no transfers. You buy one of two ticket types:

And of course there's also a smart phone app that enables you to purchase tickets and generate a ticket image that your phone can display when you use a purchased tickets. Finally, ticketing on the light rail is mostly an honor system. No gates and fences, no gate agent or conductor collecting tickets, just an occasional sweep to make sure passengers are in fact ticketed. Whatever is lost in "free riders" is more than made up for in reduced staffing needs and convenience value.

So public transit is a huge win for the Portland area. Even more striking to me, however, is the development of urban green space.

Let's be clear: urban green space is a clear positive for the Seattle area, and a dimension where the Seattle area scores better than almost any other urban area in the country. The Burke-Gilman Trail and Lake Union perimeter is marvelous. Issaquah to Redmond is full of great trails through preserved wetlands. In the South Sound area the Inter-Urban Trail and the Foothills Trail are real gems. Only the downtown waterfront disappoints, evoking the kind of tawdry tourist trap reminiscent of the worst of San Francisco's Fisherman's Wharf.

But Portland green space is on a whole different level. First of all, Portland has McCall Waterfront Park, running along the Willamette River from the Marquam Bridge all the way to Steel Bridge. That's two miles of prime riverfront real estate set aside as public space. Then there is Forest Park, arguably one of the greatest natural preserves in any urban area in the country. Showcased by the 11 mile long Leif Erickson Trail, Forest Park houses many trails totaling over 100 miles that offer a rugged, rustic experience for hiking, biking, or running -- all of it adjacent to downtown.

The true measure of Portland's green space is in the countless small parks and trails that surround the city. Wetlands are preserved wherever possible. At the same time bridges and plank walkways make wetlands accessible. Wasted space is avoided as much as possible; often where power lines are run, there is park space that has been developed beneath. Rock Creek Regional Trail is a perfect example of this. Beneath the power lines you'll find a full 18 hole golf course, a community garden, a duck pond, several playgrounds, and four soccer fields.

My favorite example of thoughtful planning and attention to detail is the very modest Fanno Creek Trail. Fanno Creek runs through a dense urban area along the Beaverton - Portland border, passing through Tigard and Tualatin before eventually emptying into Oswego Lake. The trail spans a 6 mile segment of this from downtown Beaverton to the edge of Tualatin. The trailhead is about a mile and a half from my apartment, giving me an opportunity to do an out and back urban run of up to 15 miles with only 3 miles actually on streets.

The Fanno Creek Trail has several playgrounds, a basketball court, a baseball field, and an 18 "basket" disc golf course. Every neighborhood that backs up to the trail has a pathway that connects to it. At the two busiest roads the trail crosses there's no need for crosswalks because bridges take the roads over the trail.

Near the end of the trail the green space on either side gets narrower and narrower, until the back yards of the surrounding neighborhood back right up to the trail itself. At this point the entire green space is about 8 feet wide. If you look at this section on Google Maps the view is remarkable; there really shouldn't be room for the trail to exist at this point. Yet some urban planner had the forethought to make room for the trail. Each residential lot along this section has to give up about a 4 foot wide section at the very back of the lot. But it's hardly a sacrifice. The usability of these back yards isn't really affected, and the presence of the Fanno Creek Trail in the neighborhood adds more to the property value than the diminished lot size takes away.

Really, that's how it should be. Urban planning and green space preservation should not be about sacrifice and what the community is giving up. It should be a net win for everyone: the environment, the neighborhood, and the overall metropolitan area. All it takes is a little attention to detail.